The largest species of fox is known as the Red Fox. It is also the one most people are familiar with. They do have a gorgeous red coloring to them where their name comes from. They can also be shades of orange and brown too. The coat is often very shiny giving it a nice glimmer as they move around. In fact, their coats were once a prime reason why these fox were heavily hunted.

The average male is about 14 pounds with the females just a couple of pounds lighter. The tail is very long, covering about 30% of the body. This tail is very thick and bushy which is a telling sign that the animal speeding by is definitely a Red Fox. Full grown, the males are about 3 feet tall and the females about 2 feet tall.

The Red Fox has pads on the bottom of the paws that allow it to move with ease in any type of terrain. They also have sharp claws on all of them that stay out all the time. These claws help them to capture prey, to fight off predators, for digging dens, and for getting to food under ground.

They have long, pointed ears that allow them to have an exceptional hearing ability. They can even hear the movements of rodents and other prey under the ground. They have amazing eyesight as well which helps them to find their way around at night. They body is long and slender so that they are able to move very quickly. They are powerful animals that also have an elegant view to them.

The findings of early canine remains indicate that the Red Fox has been around for millions of years. This isn’t surprising to experts that study them today though. Most are impressed with the adaptations this animal has been able to make throughout time. Yet it isn’t fully understood what all happened that resulted in the Red Fox being out there in so many regions.

Perhaps they were thriving with such abundance that they had to spread out for survival. Finding food and shelter could have been limited so they continued to branch outward for the overall benefit of the species. 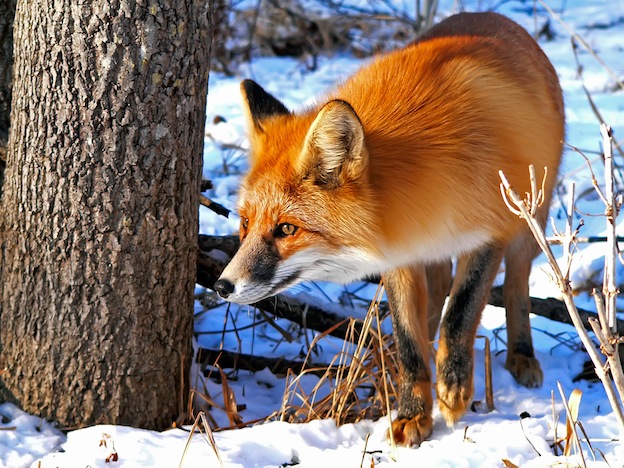 For the most part the Red Fox lives a live that really isn’t very exciting. During the day they go to a den where they can rest and be protected from both predators and the elements. At night they go out to hunt for prey. They may walk a long way each night looking for food sources.
They do enjoy their solitude but it is common for the home territory of them to overlap. Generally they will simply go about their business and not bother with each other. When food is hard to come by though it is going to increase their level of aggression. During mating season the males are also more protective of their territory.

One of the reasons why people know of the Red Fox more than other species is that they have an amazing distribution out there in the world. In fact, these fox can survive in most types of environments. It isn’t unusual to find them in colder areas as well as the desert. Some of them live in the mountains while others are on the plains.

Just about anywhere you explore in the Northern Hemisphere you will find that the Red Fox lives out there. While they are also found in the Southern Hemisphere it isn’t to the same degree. In the later part of the 1800’s they were also introduced to areas of Australia. They continue to be thriving there today.

The Red Fox will consume just about any source of food it can find. This is one of the main reasons that this species of fox has been successful with the diverse habitat it has out there. They find small animals in the wild such as squirrels, rabbits, and rodents. They will also consume worms, bugs, and spiders.

Using their paws, the Red Fox is able to dig for food sources that are under ground. They can also move rocks to get to them if they need to. During specific times of the year there can be fruits or berries growing where they live. If humans live in close proximity they will also consume chickens or cattle. They can spend as many as 5 hours per night finding food. 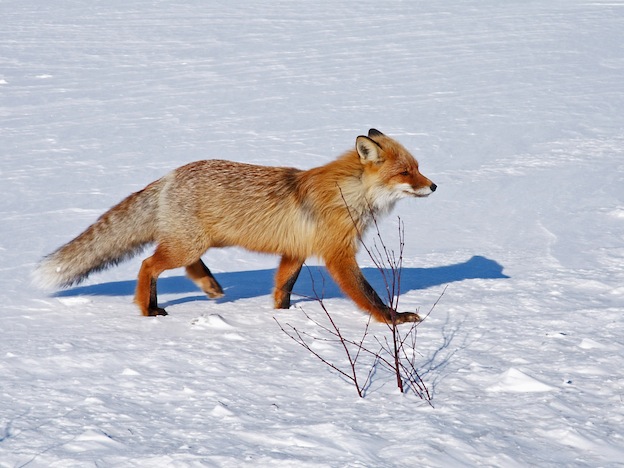 A fox in the wast snow fields of Western Siberia.

From December until February is the mating season for these fox. The females attract the males because their bodies start to give off a very strong scent. They have scent glands that increase in volume due to the extra hormones in the body. This process is called estrus and the females will have about a three day window for mating to occur.

After mating, the young will be born about 60 days later. The female prepares for the birth by getting a den ready. She will expect at least four pups but it can be as many as six so she needs enough room for them to all stay for about a month after birth. Once the young are born she will stay with them in the den around the clock for that first month.

It is the responsibility of the male to bring her back food. Should he be injured or killed, there is no way he will be able to continue doing so. Eventually, she will have to leave her young to go get her own food. Otherwise her body won’t be able to produce milk for them to drink. Yet it is very dangerous to leave them alone and predators could kill them before she returns.

The Red Fox does very well in captivity and can live up to 15 years. In the wild some have been able to live for a decade. However, the average lifespan is very short – from 2 until 5 years. The Red Fox has a very high mortality rate for those that are leaving the security and protection of their parents to find their own location in nature. The larger a Red Fox is the less likely it will become a victim of a natural predator.

The types of predators that the Red Fox comes into contact with depends on where they are located. Big cats are the main natural predators of this type of fox. This includes the lynx, panther, and bobcat. The wolf is another predator that they have problems with, but due to wolf populations being small this isn’t a huge problem anymore.

Humans are the biggest predator that the Red Fox has to contend with. They used to be widely hunted for their fur coats. Today, there isn’t very much money in that any more. Even so, the hunt for them continues due to the bragging rights and how great they look after the taxidermy process.

In many areas the Red Fox is hunted to keep it away from chickens and livestock. The owners of those animals are tired of losing money due to the fox killing the animals. However, it can prove to be an endless battle because after one fox is taken out it won’t be long before another moves into that territory.