The Kit Fox has a very different body style with a slender body. It has a large head with very large ears. It also has a long tail with bushy fur on it. This fox is gray in color and the tip of the tail is black. They are categorized as the smallest species of fox. What is ironic is that they are the smallest in size but they also have the largest ears of all the known species.

It is believed that the large ears do help the to hear well. However, they also help them release excessive heat from the body. Fully grown they only stand about 1 foot high. They also don’t weigh any more than 4 pounds.

You will find the Kit Fox living all around areas of North America. They mainly are found in the Southwest areas of the United States. However, Utah is well known for their number of them too. There are also large numbers of them in Mexico. This species of fox tends to prefer the warmer climates. They are able to thrive in desert regions.

There are plenty of sources of food out there for the Kit Fox to live on. They include rodents, rabbits, fish, bugs, and even small birds. It is common for the hunting grounds of these animals to be the same as other Kit Fox. However, they will hunt at different times of the day or night instead of all once. 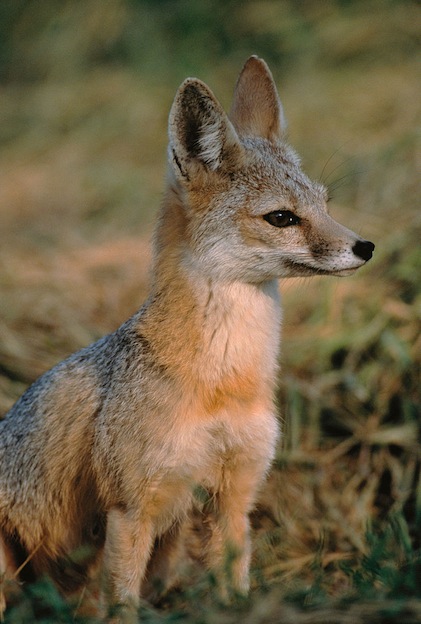 The Kit Fox will pair off in late October or early November for mating. They sometimes go back with the same mate for several years but often they get a new mate annually. They create a large den where they live together. The young are born in either March or April of the following year. They can have from 3 to 14 young at a time to care for.

The female will remain inside of the den with the offspring once they are born. Her body will produce milk that they feed from. Her body will also help them to stay warm until their own fur grows in. The male will go get food for her so that she can tend to their needs.

The young will come out of the den with the parents when they are about 1 month old. They will engage in playing and other activities so that they can get stronger and learn to hunt. They are fully grown and ready to venture out into the world alone when they are about 5 months old.

The Kit Fox is protected under the Utah Wildlife Code. In other areas it can only be hunted during specific times of the year. Hunters have to obtain a license for authorization to legally do so. The loss of habitat is the biggest threat to these animals. There are efforts in place to help them keep that environment for survival.

Many Kit Fox are killed annually due to off road vehicles on the same land where they happen to live. Illegal hunting of them has also been found to take place in many areas out there. It can be difficult to find out who is responsible and to enforce laws against it.