The body of a fox is build to offer it strength and speed. They are very slender animals with a long nose and pointed ears. Looking at these canines you wouldn’t expect them to have such characteristics. They have thin legs that are very strong and that can move quickly. The padding on the bottom of their feet allow them to cover any type of terrain without difficulty.

They are able to move at a speed of up to 23 miles per hour. They are very graceful in their movements and can stay at a top speed longer than their prey and most of their predators. This element of speed is key to their overall survival. The strength develops when they are young as they spend time chasing each other round and playing games such as tug of war.

They have a coloring that varies with shades of red and brown. They are also white along the face and belly regions. Some species of fox also have black areas on their bodies. Many species have a long bushy tail. It isn’t used for balance as many people assume. There are scent glands found here that they use to mark territory and for interactions with each other.

The scent glands are what they use for their communications. Since the fox isn’t designed to have much to offer in the way of verbal communication they use these scents to communication. When a fox goes into the territory of another fox they are able to read the blueprint of the fox that is there by those scents.

When they are trying to find a mate, it is the scent that they will use in order to find each other. As the fox moves the scents will be released from various points in the body. They have very sharp teeth in the front and flat ones in the back. This design allows them to be able to consume lots of different types of foods.

They are omnivores which means they consume just about anything. They do feed on rodents and small mammals so they need the sharp teeth to kill them and to rip them into chunks. They also eat beetles, worms, berries, and fruit so the flat teeth allow them to chew up these types of food sources. 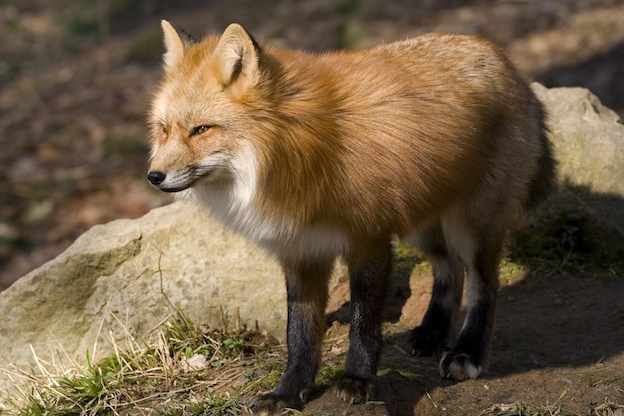 A Red Fox with his beautiful and shiny coat

They have a coat that is very luxurious and keeps them warm. They will shed their heavy coat in the summer with a new one growing in before winter. The thickness of the coat is often determined by the climate in the area where a given fox resides. Some species of fox live in warmer climates all year long. They won’t develop the longer and thick coat because they don’t have any need for it.

The fact that the fox doesn’t have very many verbal abilities means they have to use others for communication. These scent glands allow them to mark territory and to find a mate. Since the fox is moving around at night, it has very good vision. It also has amazing hearing so that it can find small animals for food that are moving around at night.

The anatomy of the fox is one that researchers are fascinated with. While we do understand the basics, there is still plenty we don’t know. It is a fact that evolution has played a part in them changing. The coloring of these animals varies depending on the location where they are found. For example some of them are reddish or brown in color. Others are gray with black. There is also the Arctic Fox that is white to blend in with where it lives.